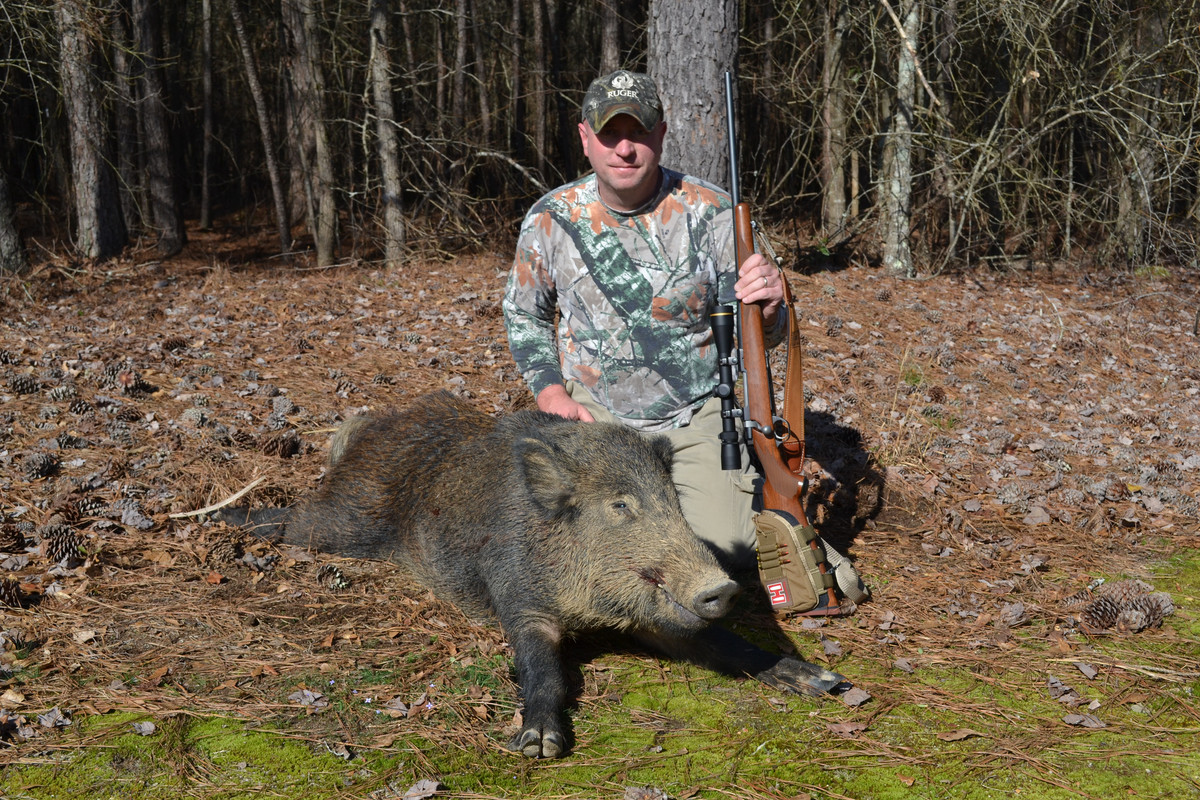 I have owned many over the years and still have several... but the .243 is just about perfect for the critters of the south. Just a joy to shoot with almost no recoil and for what ever reason, it kills way better than one would think. The Hornady 95 grain SST dropped this boar hog like he had been struck by lightning... it does deer that same way... they never make it more than a step or two...

Believe it or not one of my favorite deer rifles is my now discontinued savage 24f over n under 30-30 over 12guage with a nikon.This gun is only one shot but has basically dropped every deer within 50 yards Pennsylvania hunting distances l ever shot with it.The woods upstate where l hunt is fairly thick even in winter.
My savage 30-30 will actually out shoot my remington model 7 in 243 at "real life " hunting distances.
I think the now considered "whimpy " 30-30 is very underrated sometimes l kind of campare it to a matrix 330 it does anything you ask it to.The 30-30 is about the least finicky of any gun shooting basically any brand of ammo made and still maintains a tight group without resighting.
I have killed groundhogs up to 200 yards many times.
I don't get out with the rifle much anymore l now hunt with my crossbow almost all seasons just because l enjoy it.
My new goal is to kill a deer next season with my new colt .357 python l think that would be cool to accomplish.
Last edited by longbow joe on Sat Jun 12, 2021 12:48 pm, edited 4 times in total.
Micro 335 camo crossbones /matrix 330 nikon bolt /vixen ll / offspring with a micro stock crossbones/ matrix 355 with a micro stock crossbones/ metal ibex (adopted manco morto)/Phoenix/ trigger tec's /xacts/super freak ex's/ spitfires/zombies
Top

Although I have less and less desire to hunt with a firearm, my favorite go to guns for big game are a 20 gauge slug gun and my FA 454 Casull. Unfortunately I can only use the FA for hunting in the US. The rifle that has killed more animals than I care to remember is my old Remington 700 DM in a McMillan stock in 300 Win Mag. As I get older, I like harsh recoil less and less. I no longer have any 12 gauge slug guns and will likely sell the model 700. I regret never having a 243 (and a few others). It is truly a very versatile caliber. Some of the locals we talked to in Wyoming regularly take elk using the right bullet in the right spot. It's arguably the best deer caliber standing the test of time.
Aim for excellence. Make us to choose the harder right instead of the easier wrong and never to be content with a half truth when the whole truth can be won.
Top

My favorite rifle cartridge for deer is the 450 Bushmaster 2nd favorite would be the 350 Legend. In Ohio it’s straight walled cartridges only so I really haven’t experimented with anything else. On yotes I have an AR set up with 223/556 or a bolt action 22-250.
In pistol it’s 45 caliber my number one choice.
400 Suppressor TD
Bulldog 440
Matrix 405
Black Eagle Zombies
Black Eagle Executioners
G5 Montecs / Mega meats
Top

flinthead wrote: ↑
Sat Jun 12, 2021 9:32 am
I have owned many over the years and still have several... but the .243 is just about perfect for the critters of the south. Just a joy to shoot with almost no recoil and for what ever reason, it kills way better than one would think. The Hornady 95 grain SST dropped this boar hog like he had been struck by lightning... it does deer that same way... they never make it more than a step or two...

There's no fun in just picking one!

.308 Winchester Tikka T3 has been my primary whitetail gun in recent years.
.30-30 Winchester Marlin 336 is my most valued gun. Has the most memories, & my Dad bought it for me when I was a young kid.
.270 Winchester Browning A-Bolt. This gun belongs to my 81 year old Dad. He still shoots it extremely well. This gun will stay in the family (my brother or I).

Shot my first buck in 1975 (age 12) with a Sear's Ted William 20 gauge pump shotgun with a rib barrel & poly choke on the end. Dropped him in his tracks @ 75 yards. It was a 6.5+ year 10 pointer. Game warden who registered the deer at the Ranger's station back then, said I would be spoiled. He said, it's gonna take a long time to top that buck. That buck remained my best buck until 2015 (40 years later). Deer head mount cost $65 in 1975. I won a trophy from a big buck contest that my aunt had entered me in.

My 9 year old brother at time of all this, said he was going to do the same. We all chuckled at him. At age 12, he won the same big buck contest with an 8 pointer. He used the same 20 gauge Sears Ted Williams shotgun that my dad had bought used for $54 @ Sears. It was in bad shape. Stock had been broken, glued, nailed back together. It threw slugs good, however. We bought had our head mounts & trophies displayed in my parent's living room for years. Head mounts jumped in price. I think my brother's was $125.

I agree with Joe that the turty-turty is a underrated deer cartridge, it probably has killed more deer in Pa. though than any other caliber over the years.
My favorite caliber is actually a combination of both the firearm and the caliber, either a 600 or 660 Remington Magnum in 6.5 Remington Magnum, after that it would be a 30-06 ADL or BDL carbine.
Top 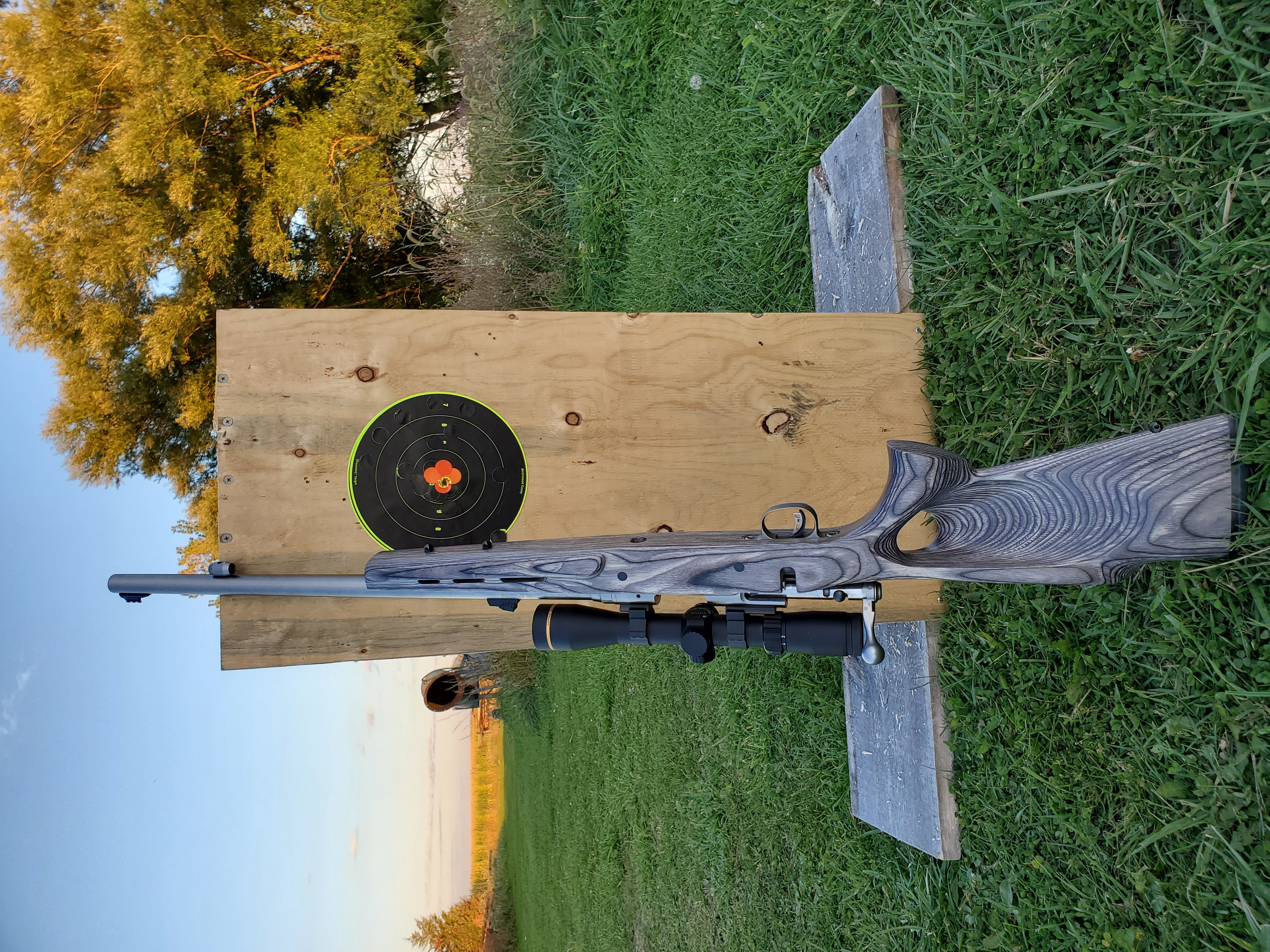 Looking forward to trying my 6mm ARC on deer for the first time this next November. Gonna be my "tight spot" 100yd and under gun. I built the gun super light.

In the wide open fields, my Rem Model 7 chambered in 300 RSAUM is my go to rifle. Was also my very first rifle.
327 Short Banshee
BD417
Ibex
Top

This post or "pole" just strengthens our crossbow addictions I'm seeing but not surprised that the crossbow addictions just carry on to the guns.
And in my case fishing rods too.
I always love going shooting with a new friend and getting to try their guns and equipment out I'm always up to shooting new stuff its all a lot of fun.
The value off these guns just keeps going through the roof l just purchased another Springfield trophy match and from the looks of it ...might be my last 1911 if these prices continue to skyrocket I'm very grateful for being able to secure my 1911 and revolver collection before this craziness happened its crazy.
Micro 335 camo crossbones /matrix 330 nikon bolt /vixen ll / offspring with a micro stock crossbones/ matrix 355 with a micro stock crossbones/ metal ibex (adopted manco morto)/Phoenix/ trigger tec's /xacts/super freak ex's/ spitfires/zombies
Top

Gotta go with my 308. Remington 788 my first rifle. One shot kill on anything I've pulled the trigger. 43 yrs and still groups awesome. Though I do need to upgrade the scope.

Second is my ministers 788 in 6mm. Hoping to acquire it someday but thats just wishful thinkin!
Top
Post Reply
36 posts