Hi all.
I was really lucky, and drew a bull bison tag for a reservation in SD, this fall.
Shooting a Matrix 330, with 18" black eagle executioners, and Boltcutters. I don't shoot past 35 yards.
Danny said I have a bolt weight of about 450 gr, and that he wouldn't feel a need go any heavier.
Others are telling me I need a 700gr arrow with a beefy 2 blade. He said no, that if I put it where it needs to go, it'll be fine.
I don't feel like doubting / questioning Danny Miller is a good idea.
Just wondering who has shot bison before, what bolt / head you used, and your thoughts on my setup. Any input appreciated. Thanks.
Last edited by KTK on Thu May 09, 2019 4:52 pm, edited 1 time in total.
Top

I am no expert at all, but I'm confident that whatever weight arrow you shoot out of your 330 will do the job. Native Americans lived for many generations off of bison using arrows they straightened by hand tipped with sharpened rocks (they really were sharp). Their stick bows had draw weights of 30 - 35 lbs. on average and, though I don't know what kind of speed they generated, I'm pretty sure it was under 200 fps. Your modern, powerful, highly evolved crossbow will be more than up to the task. Good luck!
axiom
350 SE
Top

I agree. Use your deer arrows and broadheads and enjoy the best meat on the planet!!!
A touch of frost has heightened your awareness and your heart steadily beats in anticipation. Your senses are suddenly alert to the movement on the forest floor and you realize that the moment of truth is at hand.
Top

Where I mule deer and turkey hunt in Nebraska the rancher has a herd of bison on the ranch man they are a big animal! Good luck on hunting them should be fun .
Top

I love the taste of bison meat; actually prefer it over beef. I hope you kill a big one and take home about 1200 pounds of meat. If you have not ate it, it has a sweet taste to it. A cardiologist once told me it is the healthiest red meat you can eat. Happy hunting, we will all be waiting for a picture.

Nchunterkw has done this. A pm might rest any doubts that you may have. He is a great guy and a wealth of knowledge as well.
Top

I remember a few years back on one of the forums a guy posted his buffalo hunt using a 425 grain arrow (if my memory is right) and killed a big bull with a pass through.
Wildlife Population Control Specialist
Top

More recently Nchunterkw described his successful bison hunt. Long before him there was another forum member, Greyowl, I think it was, who killed bison with his crossbow.

I don't know how bison hide and hair compare with moose or elk. I do know from personal experience that a crossbow arrow will blow through rib bones, hide and hair of an elk. You aren't planning to have a pass through on leg bone or shoulder bone. An arrow at ANY weight won't do that.

If you don't get a response from people who know based on actual experience in bison hunting, I would suggest that the "sweet spot" for arrow weight would be this. Decide what your maximum shooting distance would be. What would be the most extreme trajectory that you would consider acceptable within that distance. Then use the heaviest arrow that still functions within that that trajectory.

Find the sweet spot for your bow.
"Gun Control Laws"--trying to nag criminals into submission.
Top

Hi KTK,
I have shot 3 bison with my crossbows. Two with my Vortex and 1 with my Micro. Both of those bows have similar power to your 330. My first one was with a 525gr arrow and a 100gr Montec CS. Shot was about 20 yds and the BH went through but the arrow was still in. So the next year I upped it some by going with a 150gr Magnus Stinger 2 blade and a the same arrow for a weight of 575gr. Hit the shoulder on that one though so tough to judge. And the second shot hit the offside shoulder due to the angle, but also the heart so it worked. Those arrows were not hard to build. I used 20" Easton FMJs and brass inserts. On the 3rd bison, I used my Micro so it was harder to get the weight up without doing an arrow in an arrow. What I used were GT Nitro PRO arrows at 16", 65gr brass inserts with an extra 50gr of their weight system weights up front, blazers and a NuFletch Igniter. Tipped it with a 125gr RamCat for a total weight round 500gr. That shot was 30yds and the arrow blew through. Blood everywhere. Right through a rib. This was a 2yr old cow though (meat hunt) so not a big bull.

These animals are impressive. Hide is crazy thick. WAY thicker than any elk or deer. It's close to 1/2" thick when you skin it out. When you look at tanned hides, they have shaved them down so they are soft and supple and don't weigh 50lbs. The bones are also BIG and super strong. A meat cutter in OH told me he did one bison and would not do more because he had to replace has bandsaw blades after 1 bison.

I'd go with an arrow right around 500gr with a lot of weight up front. The FMJs are a good choice, but being Aluminum over carbon, they can still bend. The GT Nitro PROs are a good choice too. I like those for heavy game as they are carbon and 13.9GPI so you can build up something heavy. GT also has this weight system where you can add 25gr weights to the insert or nock to customize what you want. For a BH it HAS to be fixed and a tough tough head. I like the RamCAT, but SLick Trick, Magnus and others make some quality heads as well. If you want to go with the GT arrows, I have some weights, and NuFletch Igniters for them.

The shot is a heart shot and not necessarily the lungs. Broadside only with a bow. The lungs are connected so a shot there will work, but will take time to put one down and 1 lung might not ever get it down. The heart is about 6" - 8" in size so the target is not as big as you think. I'd limit it to 30yds too. And believe me being 30yds from a buffalo with pretty much only your bow is....exciting to say the least. It will be a high stress situation so prepare yourself for that.

You are going to have a great hunt. Bison are awesome animals and the meat is the best.


Keith
Keith
“The difference between death and taxes is that death doesn’t get worse every time Congress meets.”

Thanks everyone.
Keith, I will give you a call after work today.
I am really looking forward to this hunt.
Top

I'm not an expert but I think my Dad is. I know he has been with his clients for dozens of bison in Texas, Nebraska and somewhere in Canada. When I was little I used to love to tag along with the bison hunters because these are really cool animals. I have seen probably 12 or 15 bison killed. Most of the time it took a little while after the shot for the animal to lay down. One time a lady shot with her vertical bow and 2 seconds later the bull tipped over and was dead right there. My Dad always told the bow hunters to avoid the bones and to wait until a perfect broadside. I know my Dad doesn't really like broadheads with big holes in them and he doesn't like really long broadheads. He said they are most likely to break or turn off course when they hit. This winter I saw a guy from Colorado that shot a bison with a compound bow. He ended up shooting 5 arrows over a long time, maybe a half hour. The bison can go a long way very quickly if he knows you're there and is wounded. My Dad let this guy who is a taxidermist and a guide kind of do it himself because he wanted to. Dad got frustrated because the guy obviously did not know what he was doing. One thing I remember is to use a little stiffer shaft than normal. That is with a vertical bow but I think you can apply that to your crossbow. Some people shot bows in the 50-60 pound range and got it done. The crossbow is going to be doing those speeds plus more so velocity is not an issue. Stiff spine, sharp and strong broadhead and careful shot placement. That's all it takes. A little off topic but one time when I was 6 or 7 years old my Dad said I could shoot anything I wanted on the ranch. After he told me he expected I would find a ram or goat that I could get close to. Well, I saw a little bison by itself in the brush. I snuck in there with the wind and went real slow and quiet. When I thought I was 25 yards away I took real careful aim. My rifle is a little 360DW caliber - nobody would consider it a buffalo rifle LOL! The bison jumped forward and went to the side of me. I aimed again and shot two times real quick and it went down and out. I called Dad on the cell and said you better bring the truck. He said no I'm already on the 4 wheeler. I said uh no you need the truck I got a bison. Boy was he surprised! Good luck to you, Sir. It is a cool animal and really good to eat. 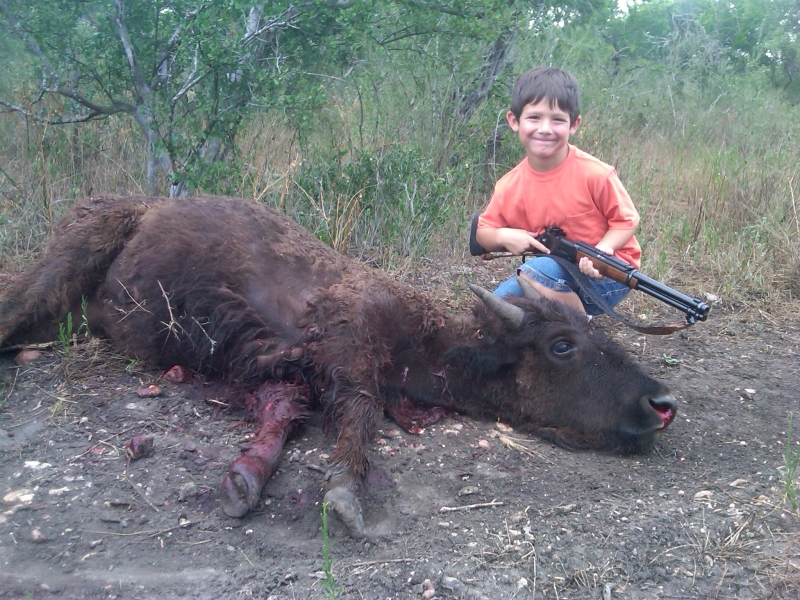