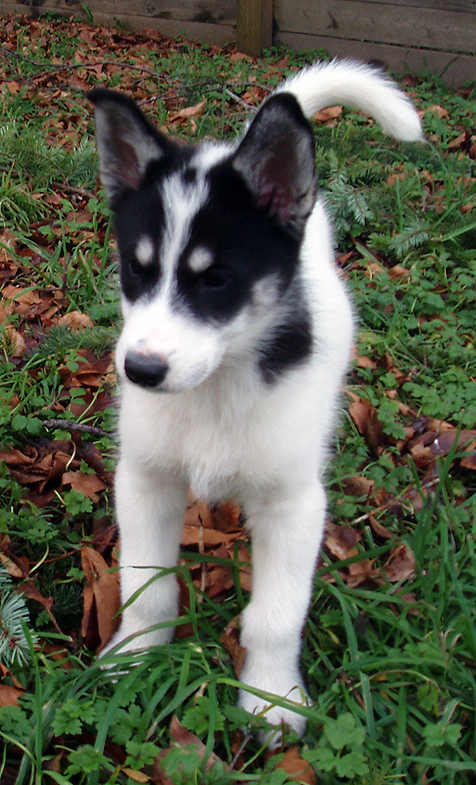 Eleven years ago, this little bundle of fluff & energy bounded into our lives.

Little did we know just how much he would fall into his own as a true Leader. 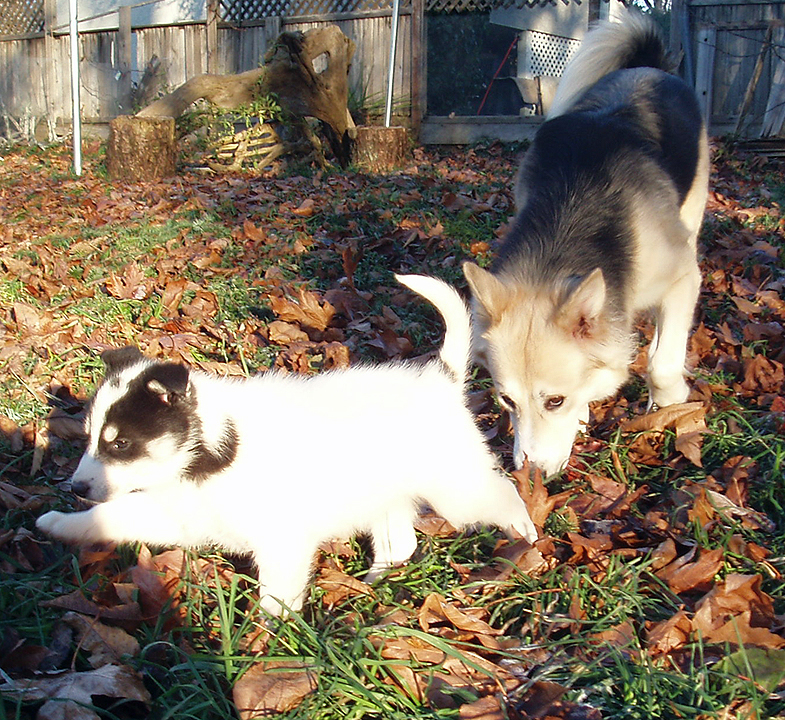 And little did we know just how short of a time he would stay "little"!!

Amaruq (aka Boogs short for The Boogeyman) was a mix of 1/2 Timber Wolf (Pa from the Yukon North Slope) and 1/2 Alaskan Husky (Ma from Inuvik). He was destined to become an extremely intelligent, faithful and extremely powerful Hybid of 145 pounds at maturity.

Boogs became my constant companion right from the start. Whether hunting, fishing, hitting the lakes, or simply kicking back he was always at my side. He absolutely loved fishing the rivers, and man would he ever let you know should you miss a single strike!! 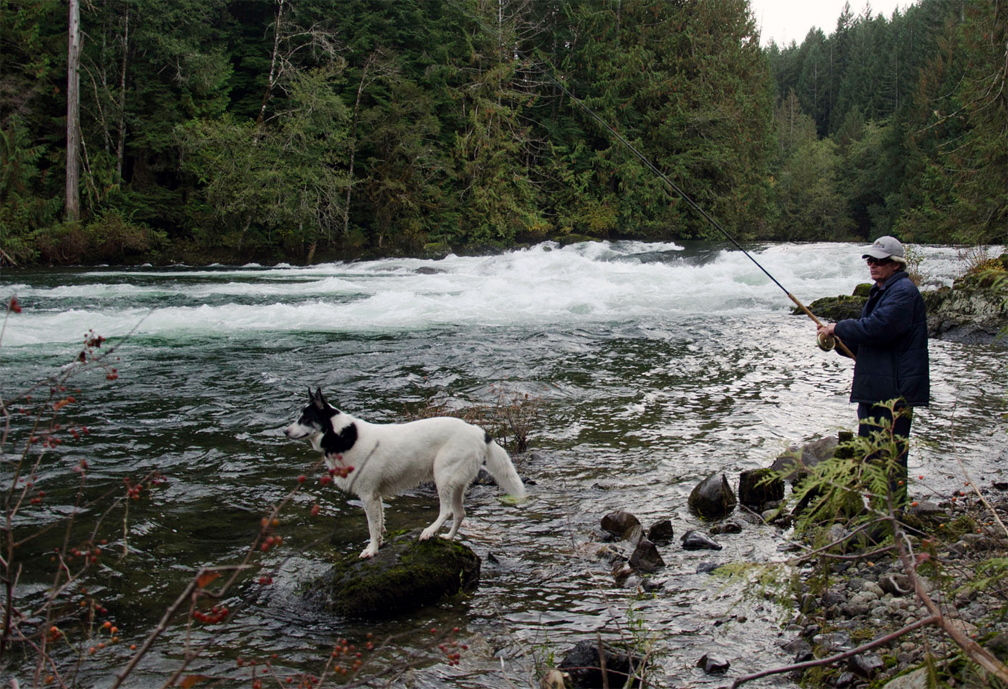 He was a completely fearless bugger that one. Attacked and beat the hell out of a decent handful of bears, some absolute giants that he had no business engaging with. But he never ever got so much as a nick. Recovered many a deer for my buddies when they had been lost. And simply loved the outdoor lifestyle as much as anyone I have ever met.

Boogsie was a very good father. His lady Asuilu who passed along last year, was a darling to him, and the love he held for her certainly showed through! 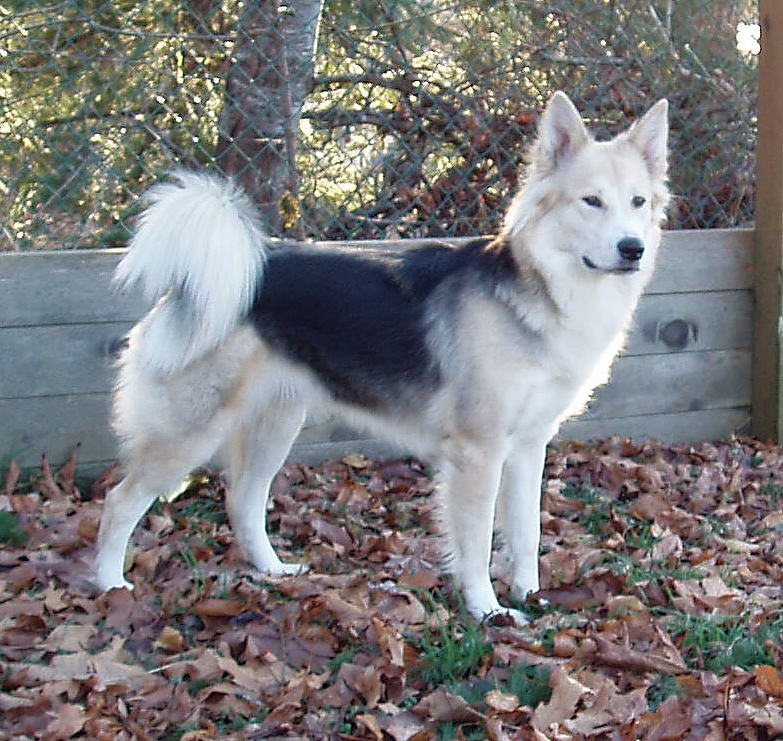 Between the two of them they produced nothing short of twenty-two wee one in but two litters! And the Boogs loved and cared for those kiddies better than any other male we have ever known! 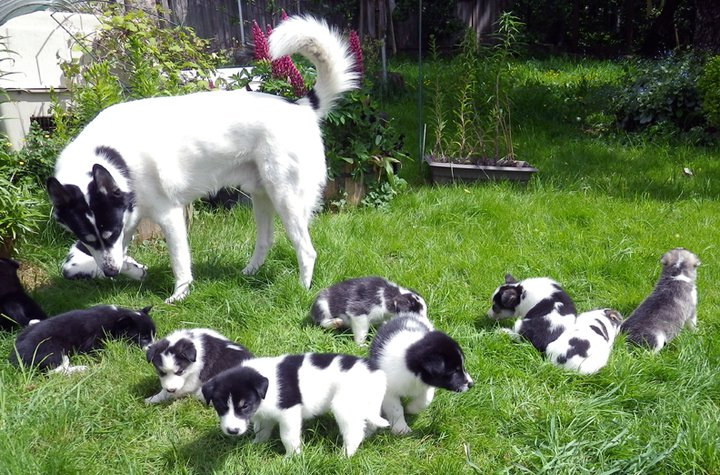 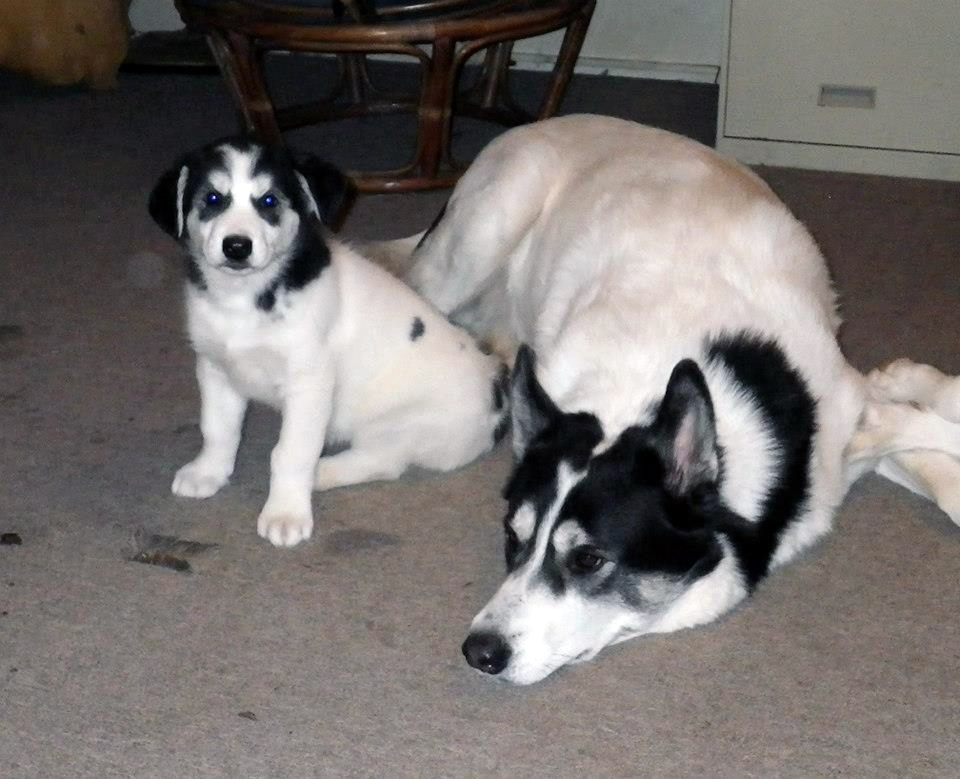 Although some have already wandered, many are still enjoying the life he gave them, and a handful have given him grandkiddies already.

One of those pups eventually came back to live with us. And so for a spell, we had three of these Buddies living with us. Bit of a madhouse at times... 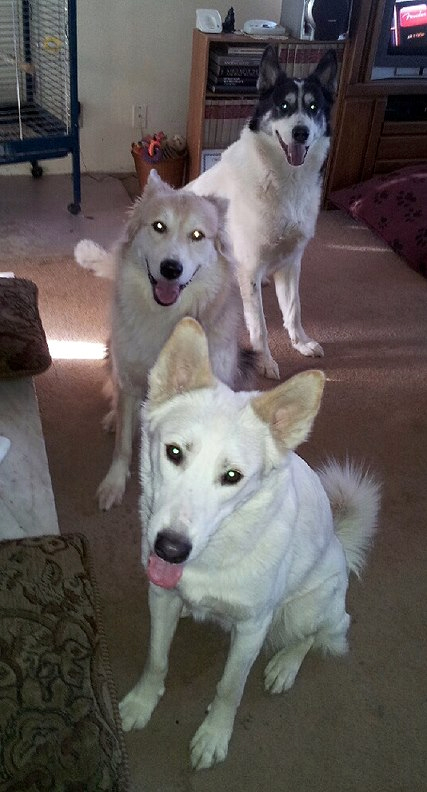 Amaruq was likely the best Companion I have ever had. He was with me through thick and thin, and returned the love I gave him without question. So, when it became evident that he was starting to have health issues some time ago, of course I pulled out all the stops to deal with that. And like the Trooper he was, he came back. For over three years...

Sadly, that was not destined to last forever. Never can be.

Thus, it is with most profound sadness that I write today of his wandering.
The arthritis in his back end came back with a vengeance, and his front knees simply collapsed trying to pick up the slack.

Yesterday afternoon our Big Boy left this world while wrapped in our loving arms.
Saying Goodbye was one of the hardest things we have ever done, and the sense off loss runs very very deep.

So today, I pay to this Prince my final tribute.
You were a very special Lad, one who was deeply loved, and who loved deeply in return.
You will never be forgotten my Boy, and always remembered with the fondest of hearts.
Your Legacy is well represented in the many pups you brought into this world, and fathered so well.
They and their children will ensure your light, and your line, never fades.
For now you rest easy my Prince. The pain is far behind you now.
And rest assured, when our time has come, we will be looking for you on the other side... 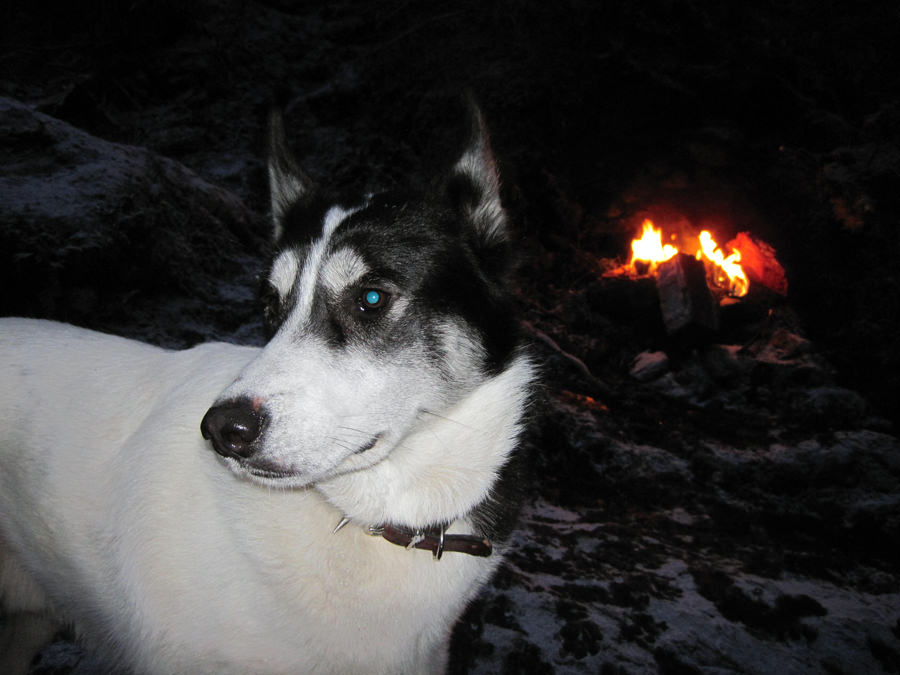 Amaruq collected his wings the afternoon of July 11, 2019.
He was three months shy of eleven years old.
He carried my heart with him when he flew...

Sadly,
Nog
"Political correctness is a doctrine, fostered by a delusional, illogical minority, and rabidly promoted by an unscrupulous mainstream media, which holds forth the proposition that it is entirely possible to pick up a turd by the clean end."
Top

It happens far too often that we lose our most loyal and faithful companions and while I’m sure there will be others it will never be the same. Our hearts are sad for your great loss.
Last edited by Bcxbow on Fri Jul 12, 2019 5:42 pm, edited 1 time in total.
Billy

“ If some of our teenage thrill seekers really want to go out and get a thrill. Let them go up into the north west and let them tangle with a Grizzly bear or Polar bear or brown bear and get that effect that will cleanse the soul”
Fred Bear
Top

Sorry for your loss. I know exactly how you feel. I just put our Simon down because he no longer could hold his bowels and couldn’t get his hind end up even with assistance. It’s just like losing a family member because after all they are!

I am sad to hear of your faithful friend has passed to cross the Rainbow Bridge. We are only here fer a short time n some shorter than others. I am glad he made you happy n loved as you also did for him, may our Lord send Blessing to comfort you on your loss
Limb Breakin Half Bubble Off BD360
Marie Laveau MXB Charge Banshee MXB320
Awshucks Relayer 25
[email protected] 417-505-9315
Top

Matt my heart is with you and your family.

Your right a dog's unfiltered love is in direct reflection to the love you give them. Once they adopt you into their life, your family no matter what. Charish the love and time you all shared. I miss my late dog's companionship, but I remember all the good times we shared.

The love your dog returned to you shows how good a person you are.

matt,
sorry for your loss. one day you will meet up with your faithful friend
R.I.P Boogs
IN GOD WE TRUST

Sorry guys for your loss .....been there many times l love dogs. The only thing you can do is give another deserving dog a good home. If you didn't love them they would not be missed so it's a no win. But in the end you just cant live without a dog. At least l cant. Mourned the other one for a month then got another one
Micro 335 camo crossbones /matrix 330 nikon bolt /vixen ll / offspring with a micro stock crossbones/ matrix 355 with a micro stock crossbones/ metal ibex (adopted manco morto)/Phoenix/ trigger tec's /xacts/super freak ex's/ spitfires/zombies
Top

I am so sad Matt. I'm so glad to have known Boogs...he truly was a beauty...and HUGE!!! My deepest condolences buddy, Boogs could not have had a more loving or caring home...not even if he had been mine...and that's saying a lot. RIP Boogsie.

Matt,
Sorry to hear of your loss. I don't know of any companion more faithful than the dogs we lucky ones have the opportunity to know.
They pass too soon and it is always a huge hole they leave behind in our lives.
My thoughts and prayers go out for you and Boogs.
wabi
Top

My deepest condolences on the loss of your baby. They are truly and without a doubt man’s best friend.
Rest assured knowing your boy will be waiting for you on the other side of the rainbow bridge.
Bulldog m380 blackout
Micro 355
Matrix 350LE
Vixen II
Proud member of the Georgia Meat Hunter's Association
"Shooting tomorrow's trophy's...today"
Top

Losing a dog, let alone the best dog is truly a heart crusher. Rarely does anything effect me more than losing a dog. They are the greatest example of true love. There's nothing better when you've got a dog that loves you best! I feel for you Matt and I wish I could ease the pain but I know it's something you have to deal with by yourself.
R.I.P. Boogs! You and Matt will meet up again!
If there are no dogs in heaven, I want to go where they went. Will Rogers
Random acts of kindness can change the world.
Top

Having lost a few along the way I know all too well how deeply it hurts Matt. I don't have the right words to console you I'm sure, it's one of those things that is too personal. I hope you spend more time reflecting on the great memories than the loss.

Sorry for your loss. It is truly heartbreaking when they leave us. Our last chocolate lab was rescued out of an abusive family and took about a month before she allowed herself to get close to me, but after that we were inseparable. She new when it was the weekend and could tell when I was heading to our hunting land by the things I was packing and there was no way she was getting left behind. They are in fact family and love unconditionally. Treasure the fond memories.
Matrix 310 ~ Hawke XB30 Pro SR ~TT~Tombstone Case.
36" All Weather Tactical Case. Danny Miller Top Mount Quiver
Strings by Boo ~ nchunterkw ~ 8ptbuk
Jeremiah 29:13