I recently picked up a 50 cal. CVA bolt hunter magnum muzzleloader. Any suggestions on powder, primer or bullet type would be helpful. Thanks, Bill
Top

My Optima likes 777 powder (loose) 100 grains and T/C Shockwaves, 250 grains. I like the Remington primers.

i was getting nice groups with 223 grain powerbelts but when i hit a doe in the shoulder the bullet blew up and there was no blood to track. found her by sheer luck the next day. only blood was her last 15 yards. switched to T/C 250 grain sabots. accurate on paper, no game shots yet. using 100 grains of 777 pellets and winchester primers in my accura. FYI i did take 3 deer with the powerbelts with behind the shoulder shots.
Micro 335 Nightmare (Black Bo)
Twilight DLX
Wyvern's Gold Tips
Drstirrup
Matrix 350LE
Top

We shoot mostly traditional muzzleloaders. Although my family prefers bowhunting including a crossbow we get a kick out of the whole thing with the old style muzzleloader. For the percussion ones we use 777 powder that is FFFg. There is FFg too but we get more velocity with less powder using the kind with one more F. For flintlocks and pistols we use Goex real black powder, but you don't need that for an in-line. I don't know what kind of caps you need but we experimented recently and figured out we could not tell a difference in accuracy or anything else between CCI Magnum and Remington #11 caps. You might need 209 primers. Some of them are made for "black powder" and help light it and get it to go off quickly. We don't use sabots. The plastic eventually becomes a pain, they can be hard to load and the bullet is usually just a pistol bullet. They can be expensive too. Some of the fun and some of the frustration of a muzzleloader is to figure out what load it likes best for accuracy. We use different kinds after shooting a bunch of groups with different amounts of powder and even different kinds of powder. The Hornady PA Conical is a full size 50 caliber 240 grain bullet that we have shot a lot of deer and hogs with. I bought them on sale for $10 and there's 50 in the box. They worked really good so my Dad bought 3 more boxes and we still are using them. Another rifle uses the No Excuse bullets. They are about 50 cents each so not cheap but you can get different weights and they work really good. I have a rifle I made when I was little and it is really fussy about the bullet. It is most accurate with the Powerbelt 295 grain, the shiny ones with the green plastic tip and bottom. Those are expensive but I only shoot a group at beginning of hunting season and a shot or two the rest of the year with that one. We killed a lot of stuff with those bullets and they always worked fine. When I did have an inline I wanted some kind of fancy expensive bullets that I thought would be the bomb. My Dad talked me into these things called Cheap Shot. Its a black plastic sabot with a lead bullet and they are cheap just like they are called. I shot 4 hogs and 4 deer with those cheap bullets and they went through all those animals and did the job with one shot. They were also very accurate. Now that my brother and I have 54 caliber rifles we mostly shoot round balls.
Top

I shoot a .50 inline and a .54 flintlock, I use sabots in both using Hornady XTP pistol bullets and 2F black powder. Both guns are accurate and I'm satisfied with their performance on deer I've shot with both of them.
I need to clean the barrel after shooting a plastic sabot to be able to load it easier, one thing both TC and Traditions tell you is not to use 1000+ lube /W plastic sabots, you can use it all you want if shooting patched round balls.
The above post by XB 1 GO has a lot of good info in it, pretty well sums up the "FUN" of owning a muzzleloader!
Top

100 grains of any brand pushing at least a .300 gr bullet. I like powerbelts.

I like spinning them like a top on a table. Very aerodynamic. Try that with any other bullet.
Top

When I still ran my Knight Master Hunter 50 cal (they pulled the season for them, gave it to Pa):

Cheers,
Nog
"Political correctness is a doctrine, fostered by a delusional, illogical minority, and rabidly promoted by an unscrupulous mainstream media, which holds forth the proposition that it is entirely possible to pick up a turd by the clean end."
Top

I own three different CVA .50 caliber inlines. All three shoot very well with 100gr of Blackhorn 209 pushing a .452 Hornady 250gr FTX bullet designed for the 450 Bushmaster riding in a Crushed Rib sabot by Harvester Muzzleloading.

I liked the performance of the bullet so much in my muzzleloaders that I bought a 450 Bushmaster to use during rifle season.

Not familiar with your model rifle but if it is safe to shoot Blackhorn powder out of then that's the way I would go( you can check their website for which rifles are safe). I shoot a lot of the 250 and 300gr SST's but it is hard to beat a XTP bullet for price and dependability. I prefer loose powder over pellets because I can fine tune my load more. In the rifles I can't shoot BH209 out of I shoot Triple 7, either 2f or 3f. Those cheap shot bullets XB mentioned are a killer deer bullet. Powerbelts SUCK if pushed to hard, keep your velocity down and they are ok especially the ones with smaller hollow point like the platinums. If your gun has a # 11 cap ignition your crud ring will be much less than using a 209 primer even the low powered ones for shooting 777. BH209 is more expensive but no swabbing needed between shots like 777,pyrodex( very corrosive in my experience ) and real black. Also buying your bullets and sabots separately is cheaper than buying the pre packaged stuff, except on end of season closeout deals.
Top

I have used many pellets / loose powders, etc. and have ran up to 12 shots without swabbing using 777 powder, and T/C XTP / or Shocks. I use 85 grains in my CVA V2 pistol and have ran 10 loads thru without swabbing. If you're getting dirty every shot, something is not right. JMHO. I shoot the handgun at 100 yards with better accuracy than I can provide in my opinion, thank goodness for a sturdy pistol rest. 100 yards with the pistol, and a bit of tweaking. I quit on the last shot within an inch of bullseye. I also have a .243 CVA V2 handgun, yep I like the CVA's a bit. 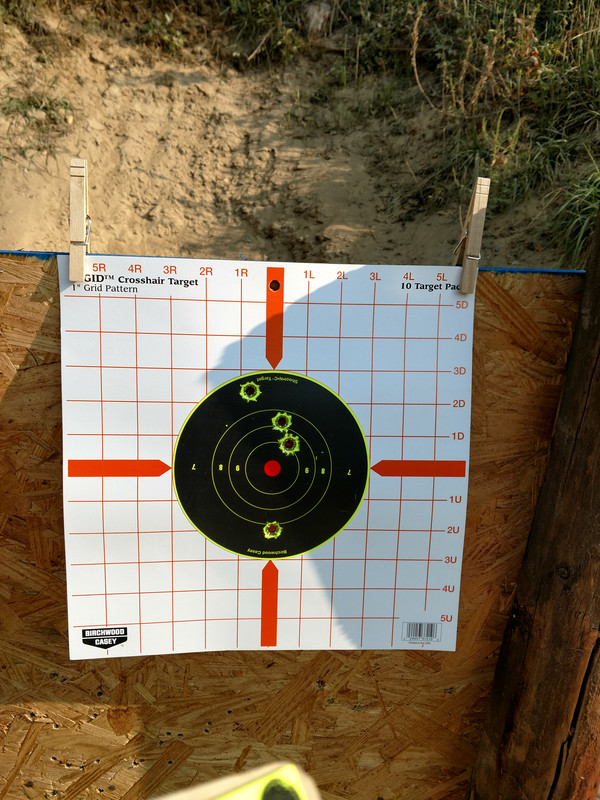 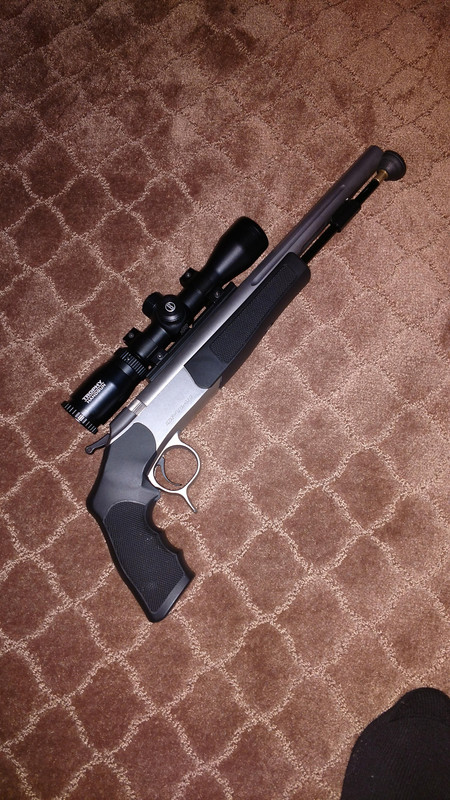 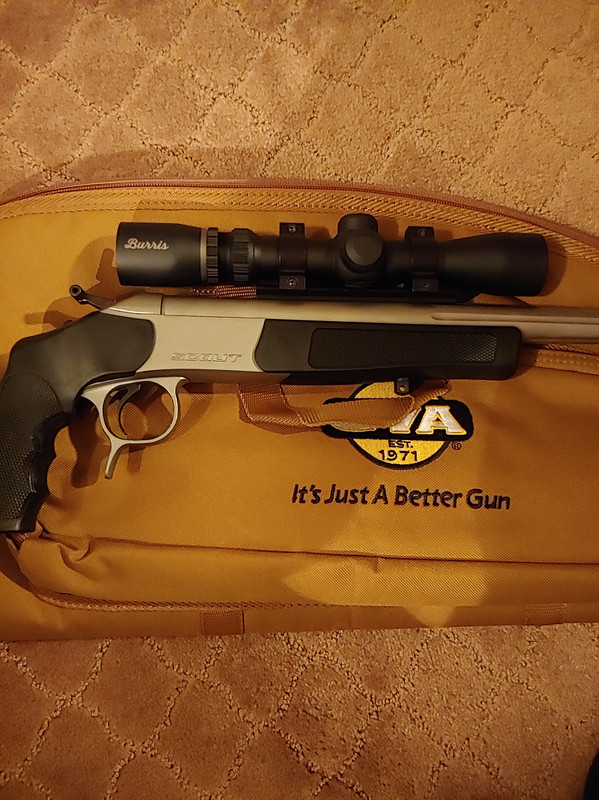