I'd go with the MOBU, however, the dealer Kryptic model comes with a rubber dipped stirrup and arrow spring.

The MOBUC is a nice looking camo pattern, but since all my other Excalibur crossbows have DrStirrup sound deadening paraphernalia, I think I'd like to at least try Excalibur's SDS. accessories. Then I'll decide if the EX Shox are worth their weight.
ComfyBear
Micro Axe 340, Matrix 380, Matrix 355, Matrix 350, Exocet 200
ComfyBear Custom Strings
G5 Montecs 125gr., SlickTrick 125 gr. Magnums

I agree, depending on the colours used, the Kryptec camo might not be the best. However, I tend to like the colour scheme Excalibur uses.

Here's a picture of my actual Micro AXE 340 kit 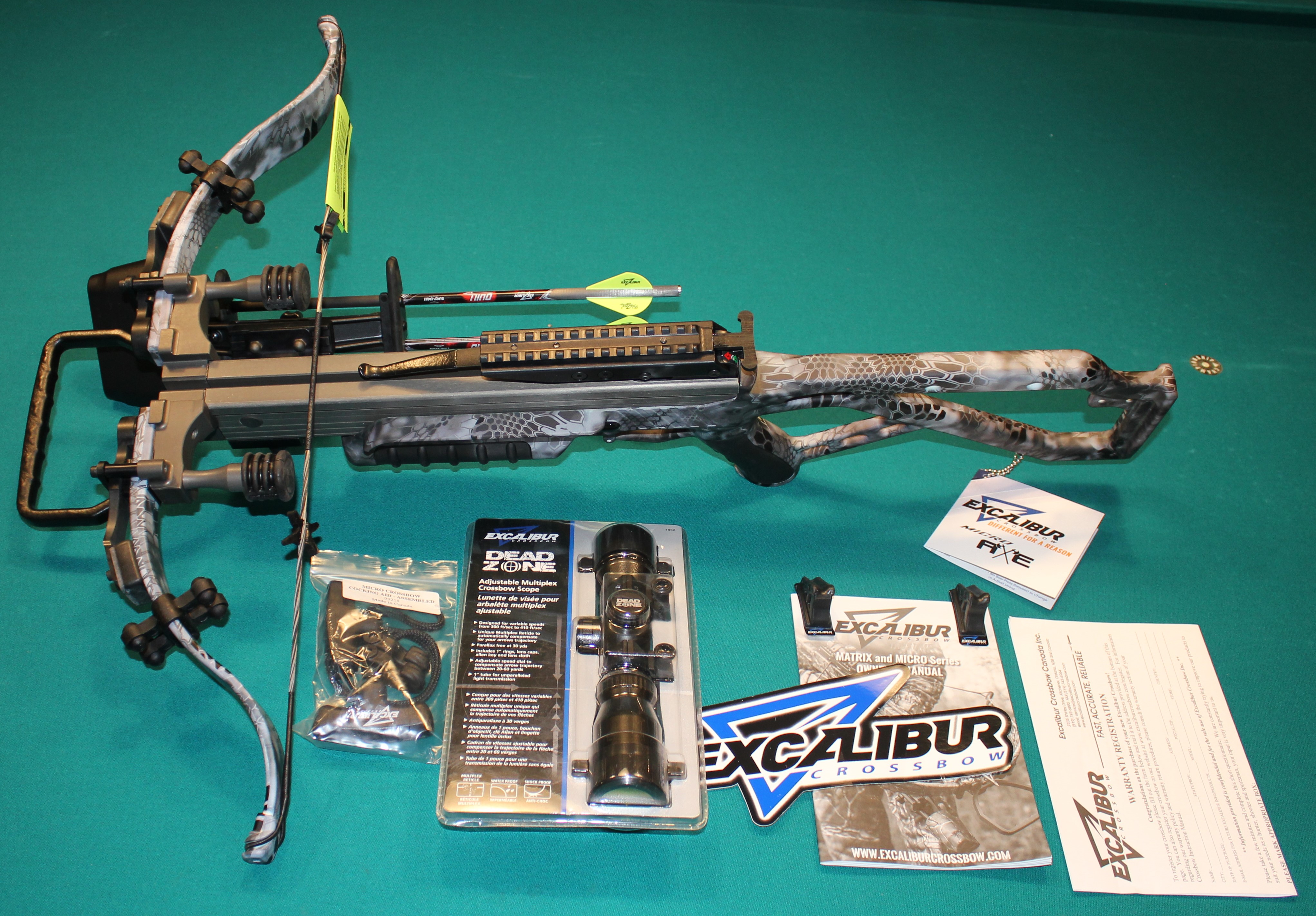 Very nice. The camo I like, just another shade or tone to break up your pattern. Your movements will get you...
'13 Matrix 380/Hawke XB30 Pro Scope
'13 Matrix 355/Hawke XB30 Scope
Boo Triggers & Custom Strings
Wabi Custom Calls
AND A WHOLE LOT OF FRESH AIR!!
Godspeed!!
Scott
Top

Too bad they don't make them in black! Lol 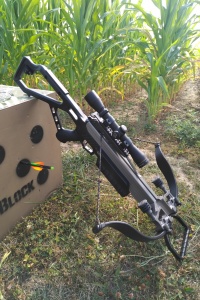 Black is so bland. I need a little bit more pizazz than that. I like and think the "50 shades of grey." are so sexy. Jeff, give it a try and you'll agree.

.... I’m still trying to comprehend what is making the Axe so compelling. it can’t be the speed, it can’t be that it is compact (the
A360 is more compact), the only thing I can see is the price point and what you get for that price point...

.... for those of us who are in love with we have... for me it’s the Alpha360Assassin... I just don’t see what the compelling reason is to purchase one

When you are in a tough situation and wonder where God is; ...the Teacher is always quiet during the test.

Anthony, I can tell you the two reasons I found it so compelling to own an Axe. First,it's the fact that although I own 5 other Excaliburs, none were a Micro. Second, was the price, compared to a Micro 335 Raid with a MSRP of $1049.99 Cdn. With the exception of a different scope and riser, a black quiver, no cheek piece and one less arrow, my Axe 340 Kryptec is virtually the same, but is priced at $749.99 and some dealers sell for less. BassPro sells the AXE 340 MOBUC for $649.99 Cdn.

For anyone needing their first crossbow or wanting a backup, getting an AXE 340 is a no brainer.
Anthony you own a Assassin 360. For the price you paid you could have bought 2 AXEs and have money left over. How does that make you feel, If you had to do it all over again what would you do. Food for thought for those that are in the market for a crossbow.
Last edited by ComfyBear on Tue Aug 20, 2019 10:24 pm, edited 1 time in total.
ComfyBear
Micro Axe 340, Matrix 380, Matrix 355, Matrix 350, Exocet 200
ComfyBear Custom Strings
G5 Montecs 125gr., SlickTrick 125 gr. Magnums

If, and again I say IF I get one it would be the Kryptek version for the extras. The dipped stirrup & arrow holder, the air brakes, and limb dampners, and of course the killer pattern. The other reasons are present on both models. The Premium Trigger, the speed / draw length, the stirrup being below the arrow channel much further than any model to date, the unique mount up coupling, and single bolt, and the best name in some time in my opinion.

.... for those of us who are in love with we have... for me it’s the Alpha360Assassin... I just don’t see what the compelling reason is to purchase one

I think it's just something different. Something new. For the past few years we have been offered variations of the same thing. The Axe offers a turn in another direction. Same as last year, when the A360 came out and those who loved it fell head over heals. Adjustable, built in crank, marvel of engineering. The Axe is the same idea only the polar opposite. Some people want even simpler than offered before, but now with new tech. Forward swept riser on Micro Limbs to mention one great step forward. Two years ago the internet would have exploded if someone suggested Micro limbs could hold that much pressure. The next marvel doesn't have to be complex
The vast majority of Excal owner have always settled for the tried and true. The M355, M380 Micro 335, current models only for the sake of conversation but this hold true for all of crossbow history. That flagship always sells the working model. This is the evolution for people who don't want anything more than the tried and true tool for the woods. Which is how they have marketed it and it's working.

I think the last 5 years, each model flagship release has been aimed at the upper end of the recurve market. All the marketing budget got spent on the $1200-$1700 models. As rightfully so.
But when a NEW model comes out that performs well, is tiny, offers all the gear that is typically an option. Well, how could it not be a hit? If you've been waiting for a new model release that wasn't $1500 it's been a long wait, but it's here.

Comfybear, This is a great looking crossbow and for the money it looks like the best deal Excalibur has offered in a while. I know you will enjoy it
Stryker Katana 360
Black Eagle Zombie Slayers
TruGlo Titanium X Hybrid Broadheads
NAP FOC Broadheads
Top

....so what I am hearing is that the main reason for purchasing the Axe is the price point which I agree...and for those just starting...totally agree...if you never owned a micro this is your baby....not in the slightest way upset of the cost of the of the Axe versus my Alpha360Assassin...don’t view it as I could have owned 2Axes for the cost of the A360....the A360 is still the most compact...plus I don’t want to cock a CB anymore...if I wanted the same feature w the Axe I would have to buy the crank....other than that the Axe is great but just not for me....

When you are in a tough situation and wonder where God is; ...the Teacher is always quiet during the test.