Well, the hunting gods have shined on me this season in a big way. I was able to take two 8pt bucks with my Matrix 350 in October. Fortunately, the primary place I hunt in Virginia has three buck tags. With 24 days off planned during November, I found myself in a situation many of you have to deal with each season. I had one buck tag left. Obviously, this changes the level of deer I would consider a shooter even as a meat hunter. I can get all the doe tags I want, but no more buck tags.

I was on vacation Friday, but passed on the morning hunt due to the wind. By early afternoon, the wind wasn't too bad although it was only a few degrees above freezing. Not knowing how many kids would be hunting with me on Saturday, I needed to take a bucket up to the top of the mountain on the highest ridge as an additional sitting position. I pulled all of my camera photos on the way up the mountain. Once I positioned the bucket, I wasn't a fan of the view from the ground so I climbed up in the adjacent hang-on stand that is only about ten feet high. Then I started thumbing through the camera photos. There was the big bear still passing through, plenty of small bucks and a few decent shooters for the kids. With only one buck tag, all of them would be off of my hit list except for one. I had one fresh night time photo of a buck we'd not seen before. Even though the photo wasn't the best, he was the nicest thing we've caught on cam this year.

I forwarded his photo along with a few others to my kids as I sat there fighting the chilly breeze and told them he is the only buck worthy of my last tag. About 45 minutes before sunset just after a flock of seven turkey cleared the area, I heard a twig crack over my right shoulder. I turned and laid eyes on a buck not 35 yards away and closing. Really?!? At best, I was only hoping to tag another doe to donate to Hunters for the Hungry. Not only was it a buck, but it was THE buck I was after. He had never been seen during daylight. Within seconds I could tell it was him. He was mature, and at that close range he was every bit as big as the blurry trail cam photo. I stood and turned to my left, using the tree as cover, as I grabbed my CVA off of its hook. I cocked the hammer and aimed around the left of the tree getting more concerned with each passing second. He was slipping cautiously across behind my stand and the wind was blowing straight up hill behind me. Another few yards and he would be downwind and I'm sure would take issue with my scent. As his front shoulder cleared a big oak at about 30 yards, I settled the crosshairs and touched off the charge. He ran about 20 steps and went down, still within bow range. Unbelievable! He's a main frame ten point with split brows on one side making an 11 point. He easily has the largest antlers this meat eater has taken. Now I'm in totally uncharted territory. I've filled my last buck tag before, but normally very late in the season. With a full half of the season still ahead, seven weeks being gun season, I'm out of buck tags. I'm fortunate to live in an area where we get more than one buck tag. For those of you that have been in this position before, what now? Do you still go out very often knowing doe are your only target? I'll certainly be going out with my adult kids to provide morale support and assist with their recoveries. I don't need any more venison, so any doe I take will be gladly donated. I have a feeling this situation may re-calibrate what I consider a shooter.

Congratulations! Not a bad problem to have! Love your pictures. You could hunt that bear you mentioned if it's legal?
James : 1 - 19-20 Know this , My beloved Brothers : Let every person be quick to hear , slow to speak , slow to anger , for the anger of man does not produce the righteousness of God .

Wow great deer that's a wall hanger their congratulations !
I am kind of having a hard time feeling bad about your tag problem though

Congratulations! That is a very nice buck!
Aim for excellence. Make us to choose the harder right instead of the easier wrong and never to be content with a half truth when the whole truth can be won.
Top

That's a nice animal and you already have 2 8's, so that's pretty darn good overall. If I have enough meat in the freezer, I sort of get unmotivated. Now if my kids are going, that's a different story. But just me, I'll stay in bed where it's warm.
Charles
Excalibur Grizzly
Top

gerald strine wrote: ↑
Sun Nov 10, 2019 5:08 pm
Wow great deer that's a wall hanger their congratulations !
I am kind of having a hard time feeling bad about your tag problem though

What he said lol

"Howdy"... from Deep within the Heart of the East Texas Piney Woods!!

Just make mine an Excalibur!!
AJ

I have the same problem. 1st day of our “gun” season. 7AM. Tagged out. So now, I’m going after bobcats and coyotes. 17 HMR and crossbow. Love hunting those varmints!
Congratulations! 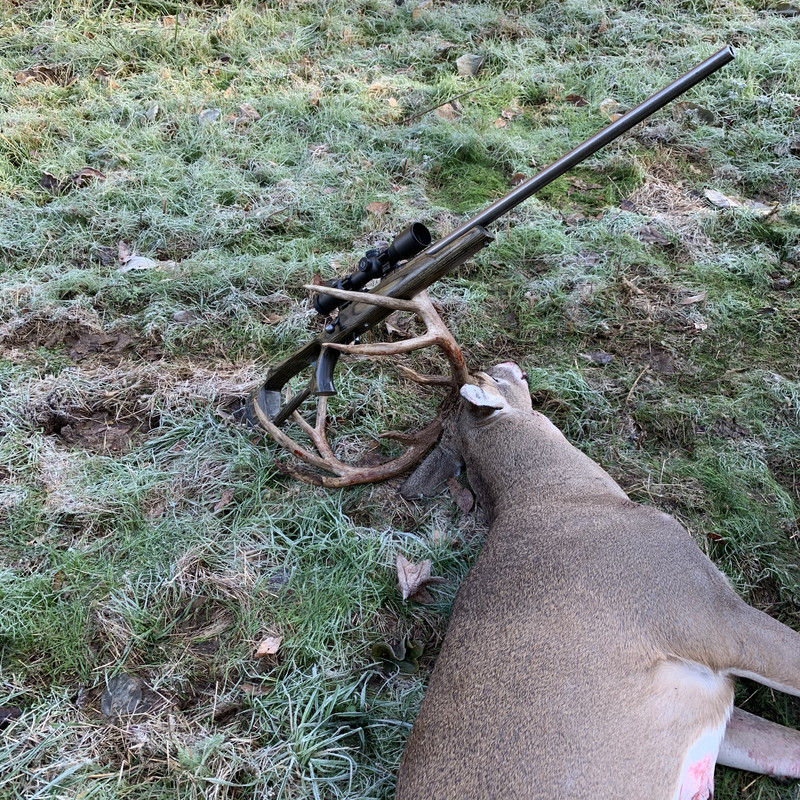