My deer season more or less came to its end on Friday night. Tags are filled and until my kids come home in mid-December and i can party hunt with them i am finished.

I had a pretty good year that started October 4th with this 2.5 year old small rack 8 point taken with the Micro. He was a challenge to recover but i won't go into details as the story was already posted here: 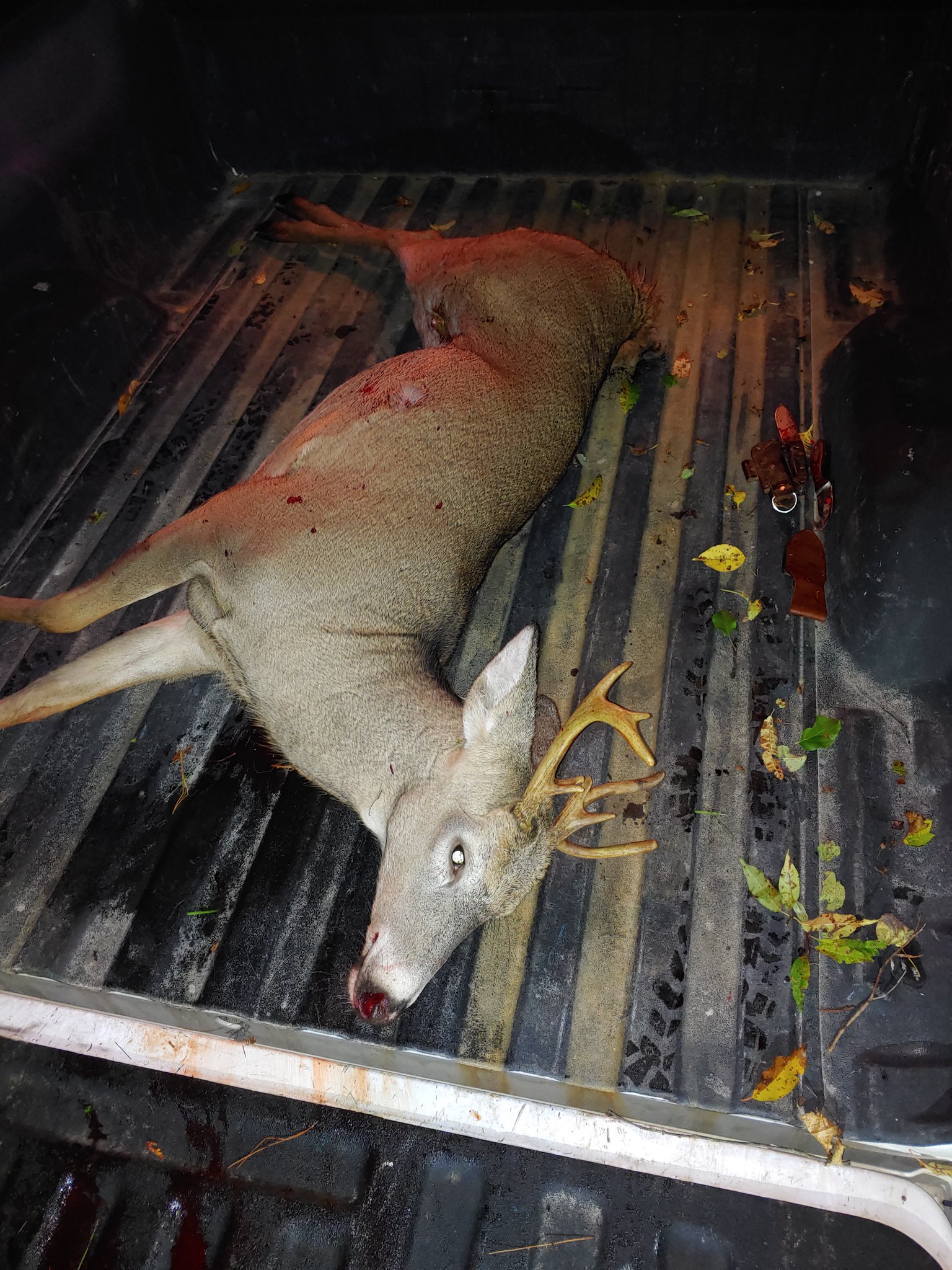 He used up my primary tag as my additional was bow only and anterless (doe) only. Only went out a few times between then and the rifle opener and did not see too much other than grouse and turkeys. On the opener of the rifle I had a group of 6 does come into range and decided to take this fawn as I was party hunting and the group had 3 doe tags to use up. Figured I would leave the older does as buck bait. 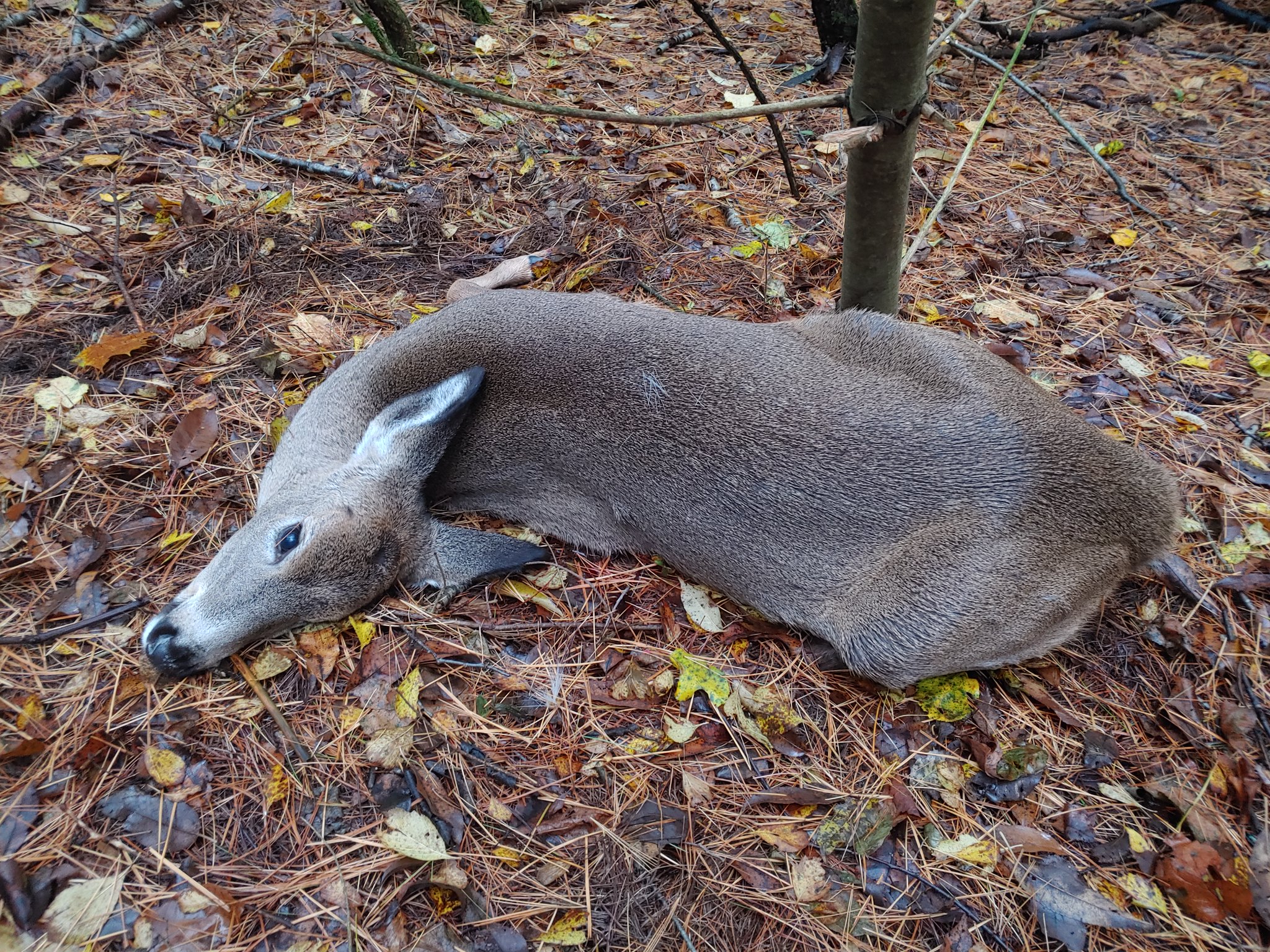 After that I spent the next 2 days grouse hunting at the camp as the pressure was off and the other 3 guys wanted the opportunity to fill the remaining 2 tags. Grouse hunt went well and ended up with 6 birds over 2 days. This was the take from the Tuesday: 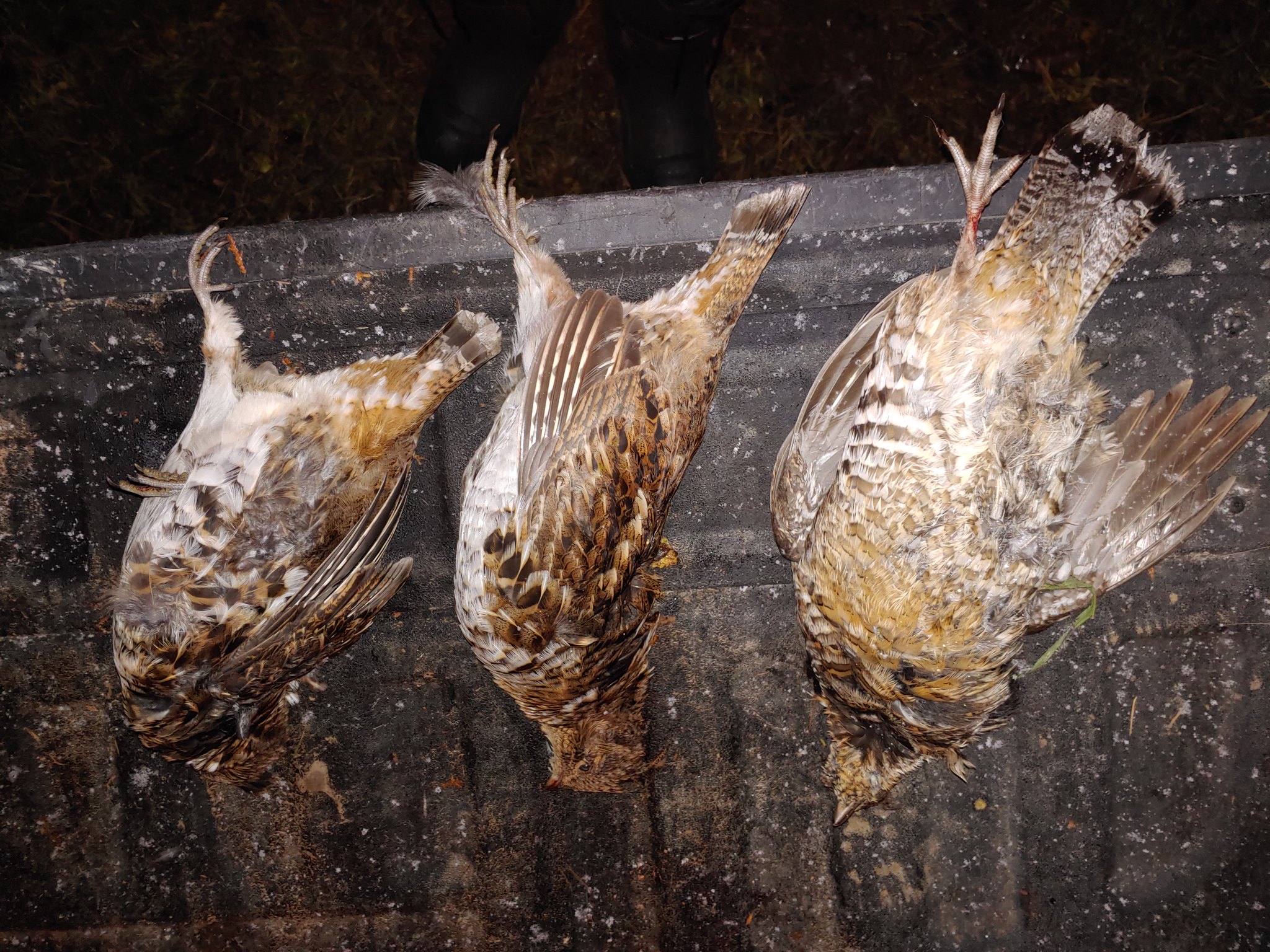 After end of day Wednesday I left camp to return to work for the balance of the week. The remainder of the hunt week was occupied at camp by a few of my employees (their time off was one of the reasons I had to head back). One large 8 point was seen a few minutes after legal, a spike was missed clean by another of the group and a 10 point busted another group member from behind. Other than that the remainder of the camp hunt was quiet.

I went back up to camp to poke around on Thursday and the amount of fresh track was crazy. Areas under apple trees still holding looked like barnyards. I checked the wind forecast for Friday and it looked ideal for the tree that had the most sign. I decided to return on the Friday afternoon. Was settled in about 230 pm on Friday in a climber. At roughly 3 pm a group of 26 turkeys showed up and started picking at the frozen ground apples. They stayed about 15 minutes and than moved on. I decided not to take a picture as I was sure one of those 26 sets of eyes would have seen the movement and you never know how close a deer might be and if it might get spooked by 26 spooked turkeys. Between 4 and 5 pm 6 grouse wandered by and picked at the apples for a minute or two before moving on. At 5 pm I saw movement in the trees north of the apple tree and watched as 7 does silently moved from to west to east in a semi circle about 30 yards out from and around the apple tree. At 510 pm the first one popped out onto the frozen ground apples and immediately gave me a broadside opportunity. I obliged her with the Micro as I was not gonna wait until 7 sets of eyes and ears were in the mix. She jumped and I lost sight of her in the pines about 30 yards from where i hit her. I gave her 40 minutes and started to track. The snow made it easy with a simple blood trail right to her. Shot looks a little low and back but she was quartering slight towards and this is the exit wound. Entrance was mid body right behind the shoulder. 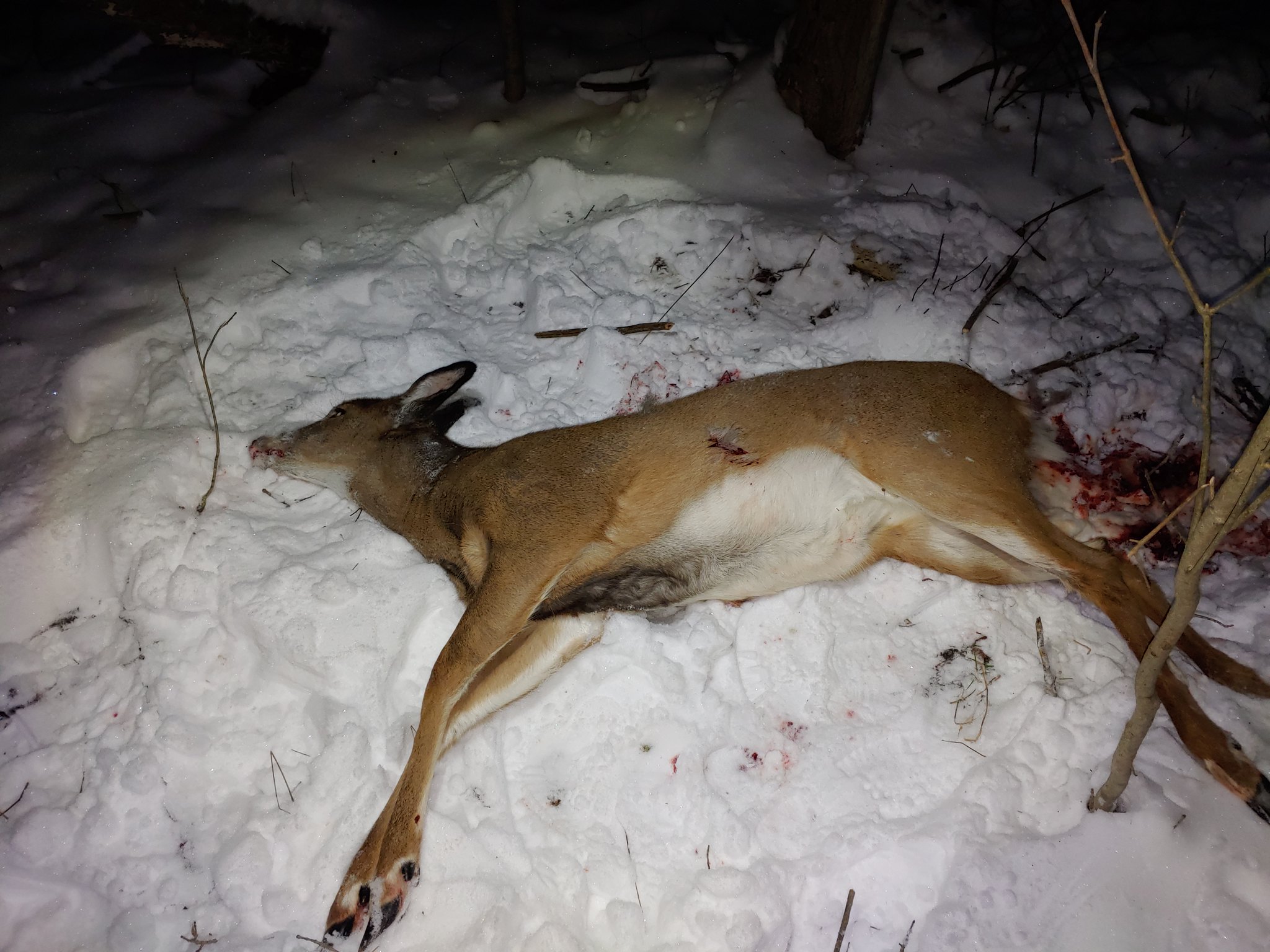 So now it's time to switch to ice fishing prep. Speaking of which we went up to our place close to Restoule and there is 8 to 10 inches of snow on the ground and the lake is completely frozen with 4 to 6 inches of ice on the back bays. Had to use the chainsaw to get water (water system is winterized already) for dishes. Driveway which is a mile long was only passable by truck for the first 3/8 mile. After that bent/downed trees were an issue (about 25 of them spread out over the last 5/8 mile. Fortunately I decided to bring the sleds just in case and they were able to snake around or under all of them. I went back out Saturday afternoon and cleared them all out but I am sure there will be more. A few pics from the weekend:

Cutting holes for water. Ice in close was mostly grey but transitioned to clear the further out you went. 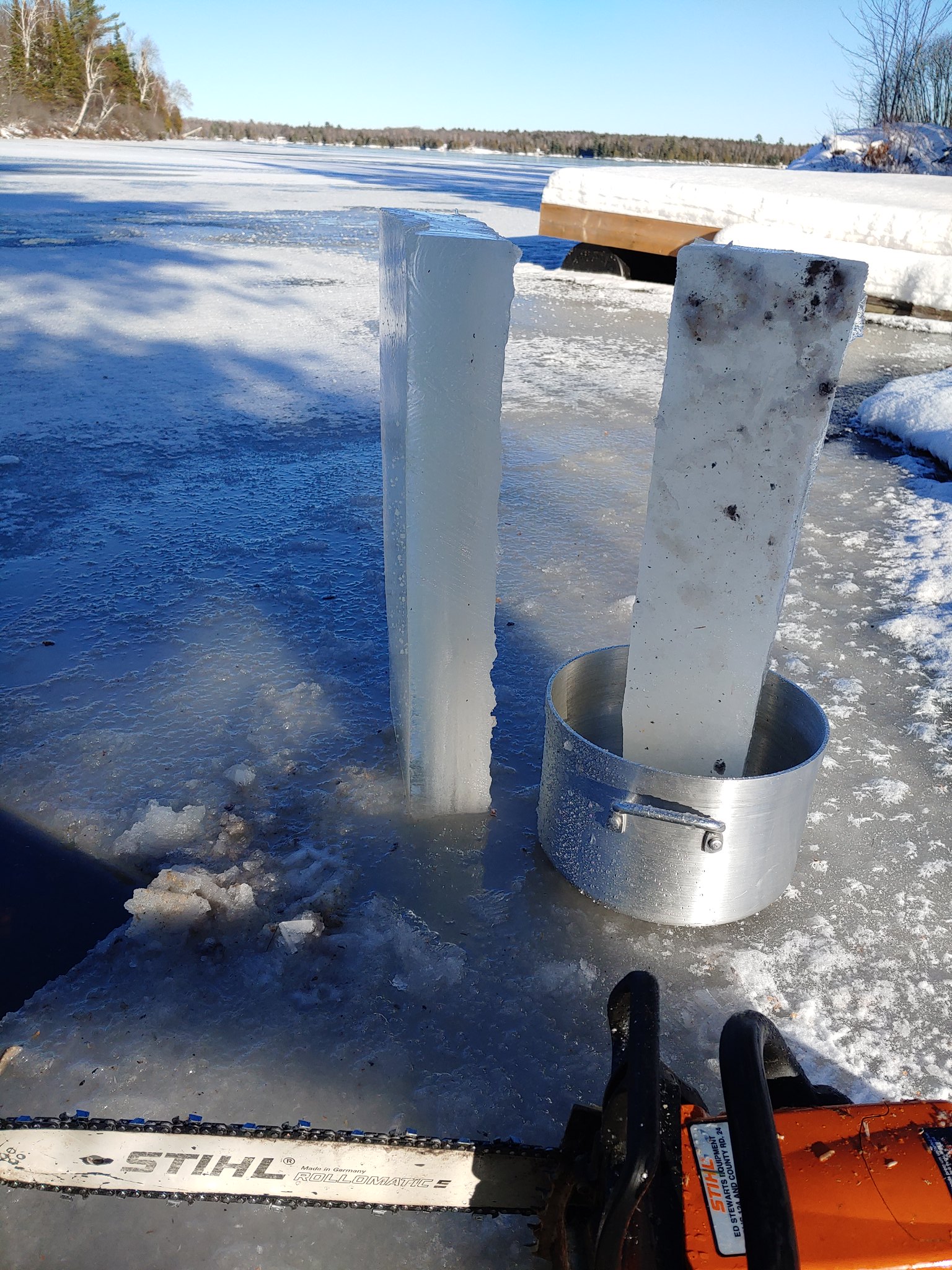 As far as we made it with the truck: 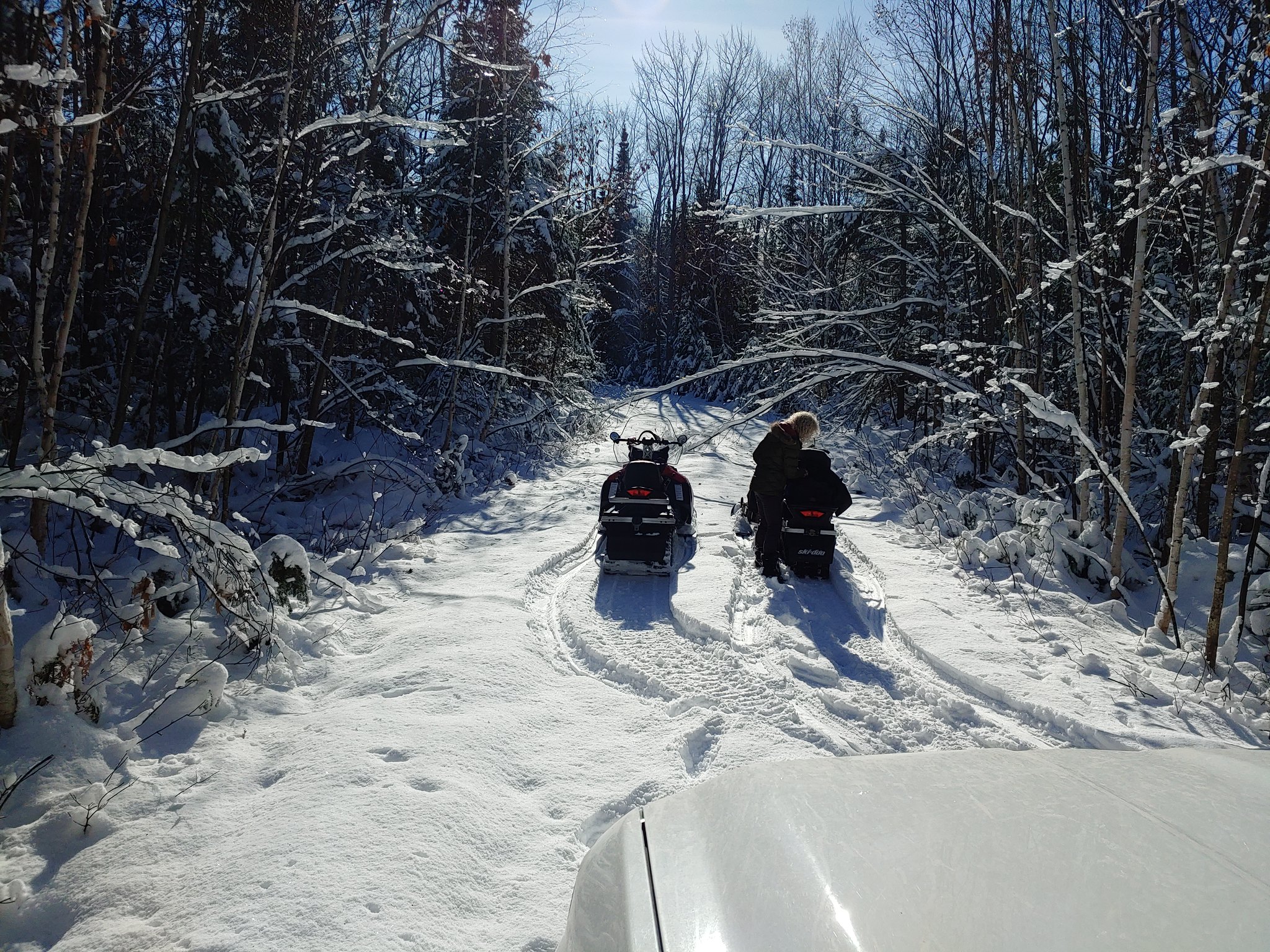 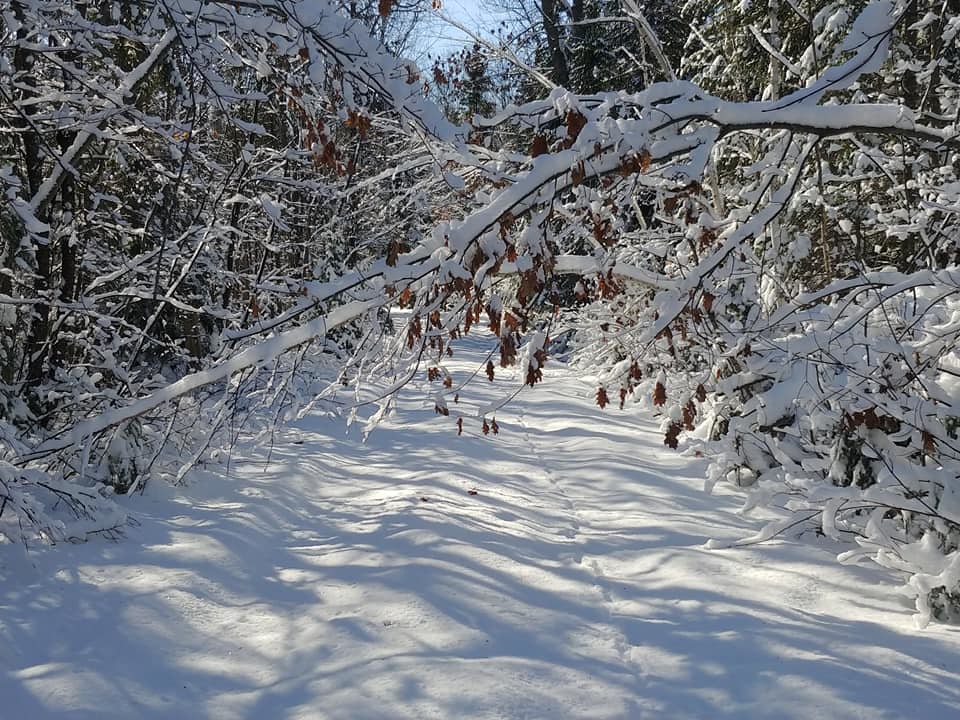 Sunrise this morning. Looks like open water further out but it's not. Hard, clear ice. 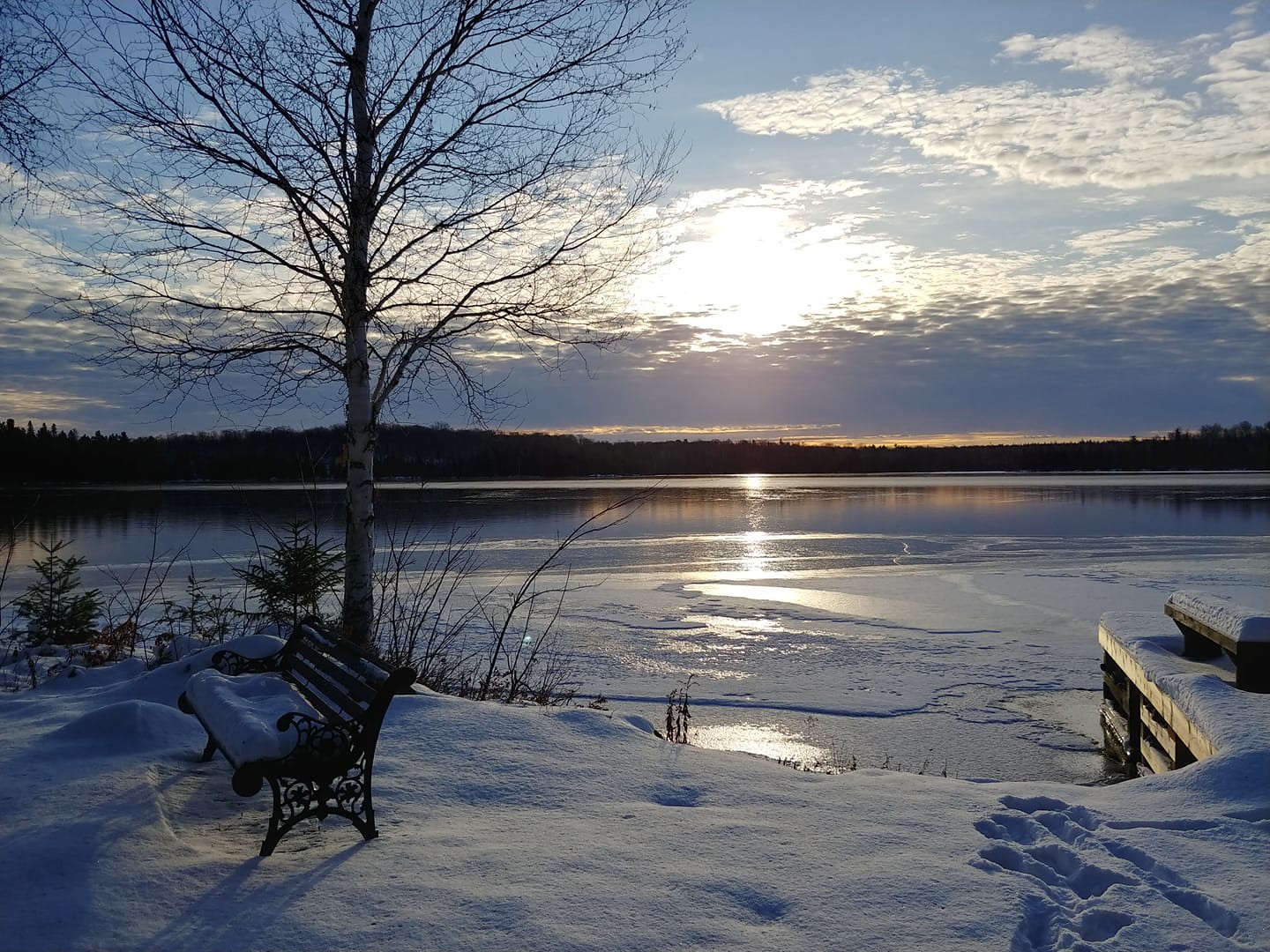 Last edited by Species8472 on Mon Nov 18, 2019 2:51 am, edited 1 time in total.
Never violate a woman, nor harm a child. Do not lie, cheat or steal. These things are for lesser men. Protect the weak against the evil strong. And never allow thoughts of gain to lead you into the pursuit of evil.

-The Iron Code of Druss the Legend
Top

That snow is really cool. The only time I've even seen snow even close to that was in Kentucky at the ATA show. Nice season!
Top

Tagging out early is bitter sweet.

We wait all year to hunt and sometimes it happens on the first sit.
Other years it's a grind to the end.

Good thing Ontario has party hunting! Lol
A touch of frost has heightened your awareness and your heart steadily beats in anticipation. Your senses are suddenly alert to the movement on the forest floor and you realize that the moment of truth is at hand.
Top

Congrats on a good season. That ice makes me cold just looking at it.

You had a very productive season time to reflect on the memories and change your gears to fishing,scouting new areas,gear repairs or upgrades, ect.
Congratulations on all your harvest.
Hunt eat sleep repeat.
Top

Thanks for sharing your wonderful season. Once again I am living vicariously through you fellas and loving the stories and pics.

Paul
You're only paranoid if everyone isn't out to get you.
Keep your friends close and your enemies closer.
My enemy's friend is also my enemy.
Top
Post Reply
8 posts • Page 1 of 1